I have the good fortune to be friends with a very good artist, George Sfougaras.

Some time in 2015, George began experimenting with the addition of small cubes to paintings, and the visual effects they could produce. We were talking about them one day, about how some form of moving lights could make for interesting effects, and that was the beginning of what has become quite a project.

For my part, although my professional work is with academic research, electronics has been a hobby since the age of 14. It’s a hobby I return to every few years to build whatever I manage to think of an excuse to need 🙂  So this was a great opportunity to build some sort of lighting system.

The first idea was to have a row of LEDs that switched slowly in sequence, each time moving the shadows slightly. I looked around the web for a circuit I could adapt and found a Christmas tree light controller that  sequentially switched a row of lights. It just needed slowing down to change once every few seconds.

In the past, I have created my own printed circuit boards with etch-resistant pen and ferric chloride (still a popular, if messy, method), but it’s rather a lot of work. So I used veroboard (now generically called stripboard) –  a paper/resin board with pre-drilled holes and strips of copper. You poke the component wires through and solder them to the strips. (see photo – about actual size.)

The circuit uses some NAND gates as a cheap and cheerful timer, and a counter that switches between outputs whenever it gets a timing pulse. I bought the two ICs from my local  Maplins store (yes, it’s “Maplin”, but I’ve always called it “Maplins”). However, I bought 20 small white LEDs on ebay for £2.19 including postage. Much as I like my local Maplins, and handy as it is, they sell the same LEDs at 74p each (£12.00 for 20, with “bulk discount”). This is not just a problem with LEDs.

As it turned out, building it got remarkably complex. I created a plan on A4 paper, but even so, getting all 10 LEDs connected in the right order was particularly annoying. Also, I followed the circuit intending to change the speed later, but I don’t think the designer had actually tested the circuit because it was changing the lamps hundreds of times a second, and they all just lit up dimly. Having figured that out I changed the timing resistor from 50K to 1M and increased the capacitor to 33uF to make a three second timer. 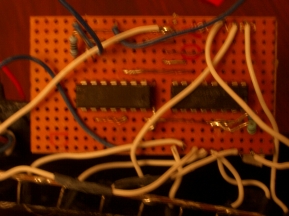 I found a nice plastic box at Maplins that I drilled to fit the LEDs into.

Unfortunately, while I had calculated that the circuit board would fit into the box – albeit diagonally – the LEDs and wiring took up more room than I had expected. So I ended up using two boxes held together. Even so, it looked quite good.
It worked just how I had planned, but not in a way that was particularly useful. The lights were only bright enough in a very dark room, and we needed much more control over where the lights were and how they changed. (Note that it originally had a potentiometer at the top to adjust the delay between changes, but I reused that for the another project.)

So I started looking around for a better controller, and settled on using an Arduino microprocessor board. Thus began the second project.