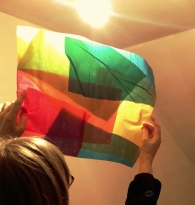 A friend of mine gave me some art for my birthday. It was made of coloured acetate sheets sandwiched between slightly frosted plastic sheeting. I liked it, but couldn’t really just paste it to a window, it seemed to need something more. So I set to to create something.

Basically, I wanted a light box type frame. Then I started thinking, ‘what happens if I light it with different coloured light?’ In fact, what happens is really very interesting. Some of the shapes disappear, others are accentuated. You get a very different artwork depending on the colour.

I already had some RGB LED strips from Maplins that I wasn’t using, so I decided to use those. They come with a remote control, but I wanted something that changed the colour automatically, rather than having to keep deciding which colour to display. The original controller consisted of a microcontroller chip, a memory chip and three MOSFETs. This is not so different to what I did with the uplighter – an Arduino nano and some MOSFETS. It just needed a frame and new software.

My idea was to create a lightbox, so the art was backlit. I did some experiments. I did a bit of research. The “proper” (i.e. best) way to do it is to take a piece of clear acrylic (aka Perspex) and light it along two edges. Nothing much happens until you scratch the surface, then the scratch lights up because it catches the light. So you need to mill tiny grooves into the Perspex, with more grooves per cm as you get further from the LEDs (and they appear dimmer). That way you get a beautiful evenly lit surface. (There are other variations on this method.) The advantage is that the backlight is very thin. The disadvantage is that it is (at the time of writing) almost impossible to buy these sheets. So I used the old method, which is to make a box and place a string of lights inside, at the back, so as to light the front surface.

The artwork is 40×40 cm. Rather than buy a box frame I tried to use what I already had, so I bought an ordinary frame and extended it. I had some translucent plastic sheet that came as packaging material when I ordered some photographic prints previously. I cut this to size and glued four pieces to the side of the frame.

The main problem was to prevent the individual LEDs from being visible from the front (through the artwork). It seems there are two things necessary. First, you need something to spread the light. I bought a sheet of 5mm white frosted Perspex from a local store and placed this behind the artwork in the frame. As well as helping to spread the light, it also served to hold the art in place. (The new side extensions held the Perspex in place.)

The second thing is to have the individual LEDs far enough away from the front so as not to see individual bright spots of light, i.e., the box needs to be sufficiently deep. I found a good rule of thumb for deciding on the depth. The individual LEDs are not apparent provided the following is true: 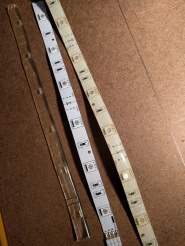 The LED strips were waterproof, meaning that they were coated in a thick transparent plastic strip. This strip was already turning brown with age (I’d had it about a year), so I peeled it off before I glued them in place.

The strips use 5050 LEDs (5mm square) with three LED colours per unit. There are 30 LED units / metre. At the time I bought them that was the usual amount. Now, at the time of writing, 60/metre is more usual, and you can also get 120 LEDs/metre strips.

Inside, I took the LED strips and hot-glued them to the back. They come with an adhesive backing, but that’s only good for holding them in place while you glue them properly.

I painted the back to improve reflectivity (of light bounced back from the front), although I’m not sure this made much difference.

Finally, the frame originally came with a 1.5cm wooden spacer that separated the front and back. I glued this to the original back and pushed it into the new extensions. I added masking tope to help keep it in place. It’s not particularly robust, but it was a prototype!